EXCLUSIVE: A Calculated Man is the latest comic book that could make its way to the small screen.

Hulu has acquired the rights to AfterShock Media’s book and is in the very early stages of developing a series based on the crime story, which is set to be published in June.

Peter Calloway, exec producer on HBO’s The Nevers and co-exec producer on Freeform’s Marvel series Cloak & Dagger and FX’s Legion, has signed to write and serve as showrunner on the project. He has previously worked with the comic company on the book Shadow Doctor, which was set in Prohibition-era Chicago and drawn from the real world experiences of Calloway’s grandfather.


The comic comes from writer Paul Tobin (Bunny Mask) and artist Alberto Albuquerque (The Amazing Spider-Man). It is a math-inspired crime series that follows Jack Beans, an accountant living in witness protection after betraying his former employers, the Pinafore crime family. After three years, Jack decides to reclaim his old life. What follows is a journey full of murder, mayhem and mathematics.AfterShock Media is the company behind comic books such as Babyteeth, Dead Day and Mary Shelley: Monster Hunter

Lee Kramer and Jon Kramer from AfterShock Media are executive producing alongside Calloway.

Calloway is repped by Kaplan/Perrone Entertainment, WME, and Jeff Frankel at McKuin Frankel Whitehead.The deal was made by Rive Gauche, an AfterShock Media Company, which is repped by Neil Sacker of Sacker Entertainment Law.

“It’s not often that a story grabs you by the throat and heart at the same time,” said Calloway. “A Calculated Man did just that. The moment I read Paul and Alberto’s beautifully bonkers book, I was excited to bring it to the screen. Doing it at Hulu — with their commitment to unflinching, unique stories — is a dream come true.” “We are so excited to have found the perfect home at Hulu,” added AfterShock Media’s President of Film and TV, Lee Kramer. “This was a very competitive situation, but creatively they understood not only our vision for the title and the lead Jack Beans, but brought us a writer, Peter Calloway, who we had not only worked with before but also pitched us a concept which was in-sync with both Paul and Alberto’s devilishly fun creation.” 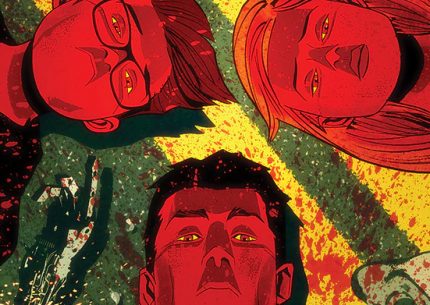